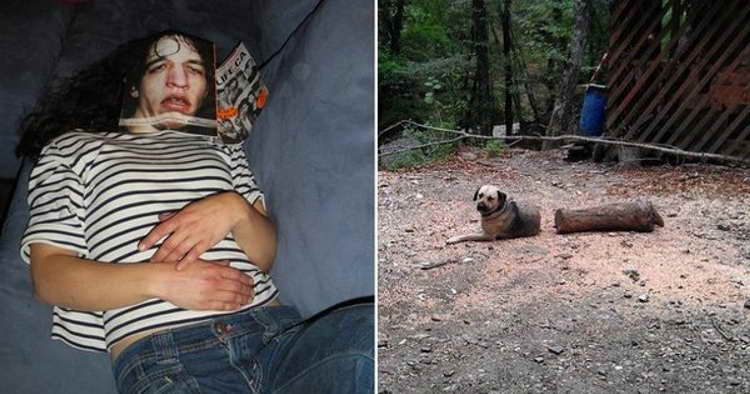 Sometimes you run across an image that looks pretty bizarre at a glance. It's not until you stop and actually look at it that you can figure out what's really happening. Take a look now and some the best examples of images you've gotta look at twice to really understand what's going on. Don't laugh too hard.

1 What the hell happened to your face?

At first glance, this chick looks like she's been through hell. Luckily it's just the back cover of a book. No need for alarm.

If you can't figure out what's happening here I will let you in on it. Look closely at the nose and mouth. You can see where the angle of the child's face makes it look like the lower portion of his dad's face is actually part of his. Mystery solved.

3 Is it a portal to the 4th dimension?

No, it's not nearly that cool. It's just a cool backdrop. Look at the street level and you can tell that it's not real. It's probably something that was done for a movie. Still looks cool though.

Calm down, it's not a ferocious beast. It's just two pups playing with each other on the floor. I bet they are loads of fun.

At first glance, you might think that this dog was cut down the middle but nope, it's just sitting beside a log. Phew, I was worried for a second.

6 Get your head out of your ass.

Angles mean everything when it comes to photography. With the right angle, you can take a normal scene and turn it into something totally abnormal like this guy who looks like a real butthead.

7 Stop being a pervert.

Sorry to disappoint you my perverted friend but you're not seeing what you think you're seeing. It's just the thighs of two different ladies.

This photo was snapped at just the right moment to make it look like two dogs were actually one very long canine. Pretty trippy right?

That sneak peak that you think you are seeing is just the driver's side seat. I bet this was done on purpose as some kind of advertising trick. It probably worked too.

Leave it to photobomb dog to make the world think that science had succeeded in creating the first man/dog hybrid creature. A scary thought indeed.

I bet you thought you were gonna get to see some boob, didn't you? Well, hairy man boob will have to suffice because that's all you're getting you pervert!

You might think this is two ladies standing back to back with one standing on her feet and the other standing on her hands but it's actually one lady on top of the other. The twin outfits help the illusions making you have to do a double take.

13 Pretty cool huh? Check out the video for a bunch more cool images that will make you do a double take.