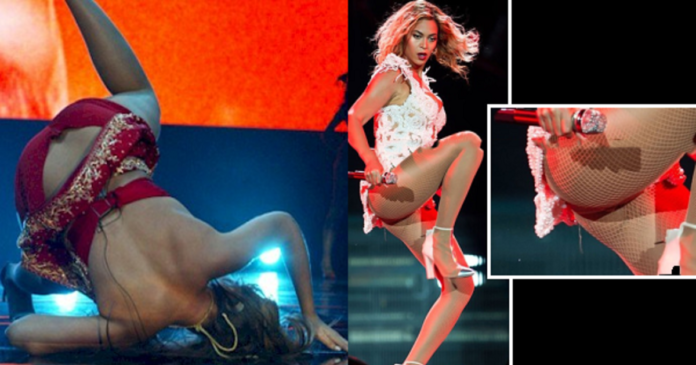 It must be tough being Beyonc who has become a famous household name. But shame, she worked hard to get there. Even still she has made some mistakes and even done some things that are considered immoral. And even still, she now has a backlog of things she wishes the world would forget ever happened. Consequences right?

Serbian Popstar Jelena Karleusa was furious at Beyonc for taking credit for outfits that she had worn during her own shows long before Beyonc did. She accuses her of copying her and even took these photos side by side and dated them as a show of proof. Along with that, Jennifer Lopez as also spoken up about her outfits being stolen by Beyonc. There are so many design similarities these days regarding outfits. Some stars go a little bit all out to stand out more than the others, but if one star gets famous for a particular outfit, such as Beyonc, of course she is just going to take all the credit.

Most singers actually sing a lot of songs that were not even written by them, that is nothing new. But why lie and take all the credit for writing songs you didnt write? Beyonc actually has a lot of talents, unfortunately one of them is to take credit for everything she does that wasnt actually her.

This is one claim that would sound like the greatest scandal to ever hit the earth. If you look at the picture below, you will notice her sitting down and making it look like her pregnancy belly is a pillow and folds as she bends down. This is driving conspiracy theorists mad, considering that they believe she faked the pregnancy with Blue Ivy, and that she probably had a surrogate mother for her baby. And above all, none of this has ever been denied.

No one will ever forget about her nipple popping out to say hi at the super bowl, no matter how much Beyonc wants you to forget it ever happened. Hell, this actually happens to the best of us so why is she so embarrassed about it? She actually got off the hook since Janet Jacksons nipple was exposed during a performance and that created so much hype that she pretty much helped YouTube become a thing. So everyone feels sorry for Beyonc.

Everyone has some family drama to deal with, but most of us arent celebrities in the spot light that everyone has to be nosy about. And for this incident it was caught on camera. Beyoncs sister Solange Knowles attacked Beyoncs husband, Jay Z in an elevator. No matter how hard Beyonc tried to distance herself from the situation, nobody will ever forget this one.

Beyonc has one delightful father (note sarcasm), he has apparently cheated on her mother Tina many a time and seems to have fathered babies out of wedlock. Blue Ivy has an uncle somewhere that she wont ever meet because her momma wants nothing to do with her grandfather. And of course no matter how badly the press wants her to talk about it, she never will.

I think it is safe to say that she has been through a lot in her life, considering her father figure and her embarrassing moments. So I guess it isnt that much of a surprise that she decided to create another persona known as Sasha Fierce. Seems rather pointless doesnt it? How do you create an extra persona and try pass it off as someone that takes credit for her songs and expect your fans to fall for that?

We all know Beyonc use to be a part of the group known as Destinys Child. They were very popular in their time and they hit it quite big. But everyone seems to forget (Like Beyonc wants everyone to forget) that the group had a few other members that got kicked out. LeTavia Roberson. LeToya Luckett and Farrah Franklin were all in the group at some point or other and they also never get any credit for the work they did for the group. Sad isnt it?

Matthew Knowles is one shady guy, just in general its hard to trust parents managing their children. They end up having full control over their live and money. And lets face it, power corrupts! Her dad cheated on her mother many times and with a famous daughter like Beyonc, he was probably constantly surrounded by young beautiful women. Besides that, what other reason could she had fired her dad over? In an Oprah interview all she managed to say was that they fought all the time. As vague as that is, the guy is just dodgy.

It is quite a big thing to be invited to sing at the Presidents Inauguration. But maybe it was the nerves or something but she ended up lip syncing. She said, Due to no proper sound check, I did not feel comfortable taking a risk. It was about the president and the inauguration, and I wanted to make him and my country proud, so I decided to sing along with my pre-recorded track, which is very common in the music industry. And Im very proud of my performance. It seems it would have been less drama if she just actually sang.

This might not be the most embarrassing thing, but her mother remarried and now she has a step sister named Bianca Lawson. The name should be familiar because she is known as the eternally youthful actress from Buffy, Vampire Diaries and Pretty Little Liars. They are all great shows but Beyonc also avoids this topic greatly. But why? Does she feel that Bianca is trying to use her to get more famous or do they just not get along?

This is definitely not Beyoncs smartest move in her career. She and her publicist tried to remove photos from the media. They mailed publications attempting to convince them to not post some of her not-so-nice photos. What they didnt realise was that doing this made her look bad, since it is a controlling and obnoxious move that also gets people talking and it starts a hype for everyone to want to see the photos. So well done.

Everyone forgets that Beyonc was in the Movie Dream Girls, and that is because the actress Jennifer Hudson literally stole the show and even won all the awards. It seems Beyonc wanted to break into the movie industry and that failed, so I wander if she feels jealous or resentment towards Jennifer?

It is no new thing for a Popstar to slip and fall on stage. Accidents happen. But it seems perfect Queen Bee doesnt like making mistakes in public. Her fans record her falling (which she has done many times) and then share it on the internet.

Jay Z and Beyonce have always been super vague about how their relationship started and when it started. And the story has apparently even been changed around a few times. But most people believe that they hooked up when Beyonce was actually 17 years old, which is illegal. And Jay Z was 29 at the time, so the age gap at that age also poses a problem. But by being famous, I am sure they understand that their fans want t know about their lives, which makes the secrecy double suspicious.